Have you ever looked at a picture and found yourself unable to understand what was going on in it? Some pictures, when taken at the right time and place, can capture the unexplainable.

1. This eerie photo shows a woman posing for the camera with an almost barely distinguishable man looming behind her. According to the woman in the photograph’s family, the picture was taken sometime in the 1990s. The woman had just moved into a nursing home and her family helped her move all of her belongings into the residence. Before saying their goodbyes, the family decided to document the moment and take a picture of her before departing. However, the family claims that there was no one else around at the time that they snapped the picture. When the photo was developed, the family was understandably spooked when the noticed the man in the background. The family was not able to explain how this man, washed out and not in focus, ended up in the unmanipulated film photograph. It wasn’t until the photograph was shown to the woman in it that offered some sort of explanation. The woman claims that this mysterious man standing behind her was her deceased husband, who had passed away 13 years earlier. 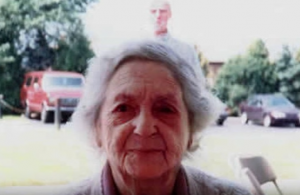