“Kratos, baby, listen, there has gotta be some mistake!”

“How DARE you imply the mighty Kratos makes mistakes! I AM the GOD OF WAR!”

Alright, let’s back up here. So, as some of you may know, the newest God of War game recently came out. What most of you probably DIDN’T know is that YOU were the ones who wrote it, because you’re actually the god of writing and art. I know, that’s a pretty big thing to gloss over in your memory, but trust me, it happened. Anyways, you decided to take the character of Kratos from a screaming, bloodthirsty killing machine to a more subdued, father figure to his young son. Turns out the screaming, bloodthirsty killing machine didn’t like being portrayed in that way, must’ve ruined his credibility or something.

“Give me one good reason not to take your piteous head, foolish god,” the grey-skinned spartan stares at you, the blade of Olympus pressed tightly against your throat.

You gulp; the bristles on your neck grazing slightly at the incredibly sharp blade in Kratos’ hand. “Hey,” you blurt out. “You like movies, right? Why don’t we explore 25 Behind-The-Scenes Facts That Will Change The Way You See Your Favorite Movies? Wouldn’t that be fun?”

1. The moment in The Dark Knight when the Joker fails to blow up the hospital the first time was unscripted. For those of you that don’t know, the Joker goes to blow up a hospital with a remote detonator, and it doesn’t go off, prompting a very Looney Tunes-style moment where he angrily presses it a bunch of times and eventually sets off the bomb. A genius moment of improv by an actor taken too early. 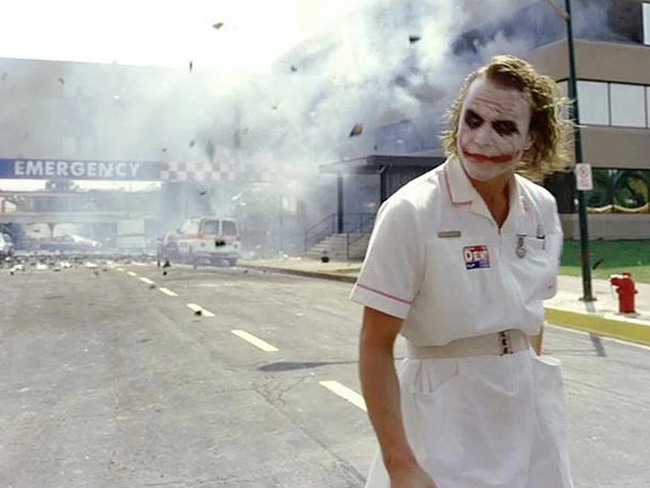 2. The typed pages with “All work and no play makes Jack a dull boy” from The Shining were actually written out by Stanley Kubrick’s secretary. In a very Stanley Kubrick moment, the second mad Titan himself forced his secretary to type out hundreds of those pages to “get the feeling of madness.” This is an unsurprising move considering he reportedly only fed Jack Nicholson his least favorite food, cheese sandwiches, on set and allegedly made Shelly Duvall retake the same scene 127 times.