Welcome, dear reader, to the Bestie rock and roll hall of fame. We would like to remind all of our tour guests that while they do in fact look like just mannequins, all the people featured in this museum are in fact real, alive or dead. That’s right folks, we have the REAL rock stars here to tell you their secrets personally.

While I’m certain that is very exciting for everyone, we would also like to take this time to reinforce the fact that visitors are NOT to use their own black magic spells to take control of, capture or otherwise manipulate the spirits. It is strictly prohibited and will result in banishment from the museum, as well as a $50 fine.

Finally, please do not tap the glass, climb on displays or take any flash photography while on the tour to avoid scaring the exhibits. If there are no objections, please continue to our first exhibit on the 25 Insane Rock Star Rumors That Are Actually True tour.

1. Steven Tyler Once Had A 14-Year-Old Girlfriend That Her Parents Signed Over To Him. Yes, dear reader, Aerosmith’s frontman convinced the parents of then 14-year-old Julia Holcomb to sign over custody of their daughter to him so the two of them could date. What’s even crazier is they agreed! The two dated for four years until an abortion caused the two to split. What’s that, Miss? Yes, I know, 1975 WAS a crazy time, but please refrain from making comments until the end of the tour. 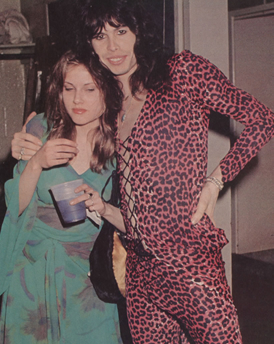 2. David Bowie and Mick Jagger were found in bed together naked. It seems the rumors about Bowie’s devil may care sex life were true , dead reader, as Bowie’s first wife Angie claims the iconic singer was caught in bed with another icon, Mick Jagger. While it isn’t as good of a collaboration as “Dancing in the Street”, it IS something we’re not too surprised about.