Earth can be a harsh place sometimes.

The world seems like it has us by the nose, doesn’t it? One minute, you’ve got this beautiful beachside property in Florida and the next BOOM, you’re suddenly homeless and begging FEMA for money that will most likely never come. But hey, at least the President threw some paper towels at you! SCORE!

Seriously though, sometimes it’s nice to know that we can take matters into our own hands. That in this crazy, messed up, chaotic universe occasionally, we can manipulate it to our own whims. I mean, it’s never anything TOO substantial we’re not curing cancer here, but you know. You can fix your charger and stuff.

Anyways… This is 25 People Making The World Work For Them.

1. Behold… the awesome and terrifying power of a SPOON! I KNEW there was a reason the Tick used that as his catchphrase! In all seriousness though, this is a lifehack for the lazy cook. You know, the one who just wants edible food and doesn’t want to make a 4-hour spectacle of their meal? 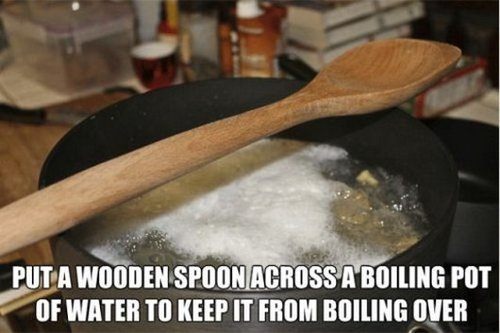 2. Elastic Park. Jeez, that was a STRETCH of a title. Eh? EH? Please give me your approval, I’m desperate for it. No, not YOU, who cares about YOUR approval. I’m just hoping my dad is reading this right now!