We have all come across a person that was really pure. What we mean by this is that they were too good-hearted.

These people warm up our hearts but also make us laugh because they are hard to come by.

Below is a list of 25 people who are just way too pure for this world.

1. Dad’s Approval: This girl sends all of her photos to her dad before she sends them to anyone else. We are guessing she believes that her father will be completely honest about the way she looks. His response to her photo is so pure that it is making us laugh uncontrollably. He was able to compliment her while digging at her mother in the purest way. 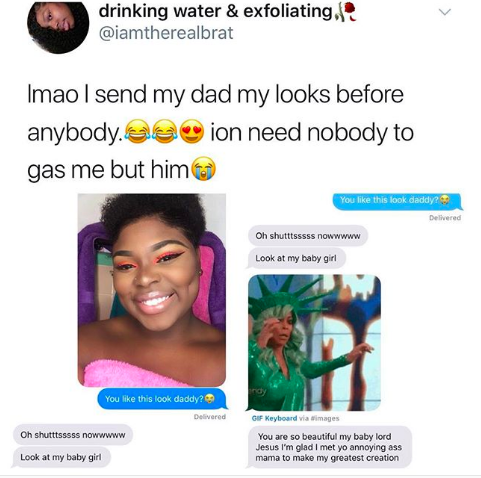 2. Dog’s Birthday: There is nothing that screams pure more than someone caring for their pet more than their friends. This person decided to not go out with their friend because it was their dog’s birthday. This is so adorable and we have decided that everyone should do this in the future. But as for right now, this person is way too pure for this world. 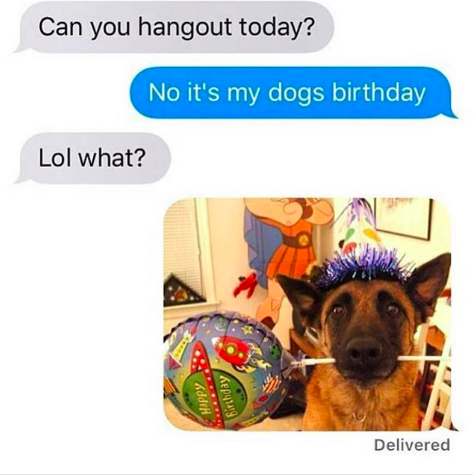 3. Lady Issues: When a father doesn’t know what lady issues are then he is completely pure. When this daughter told her father that she had to leave school due to lady issues her father thought it was because she got into a fight with another girl. Oh, if he only knew what it meant. 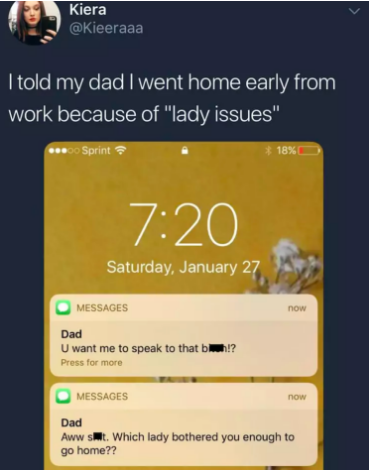 4. Parent’s Response: The people on the left side of this photo went to Disney World and took this photo. Once they sent it to their parents their parent sent one back, which is the picture on the right. These parents are way too pure for this world. We have to admit we like the parents’ photo more because they are purely adorable. 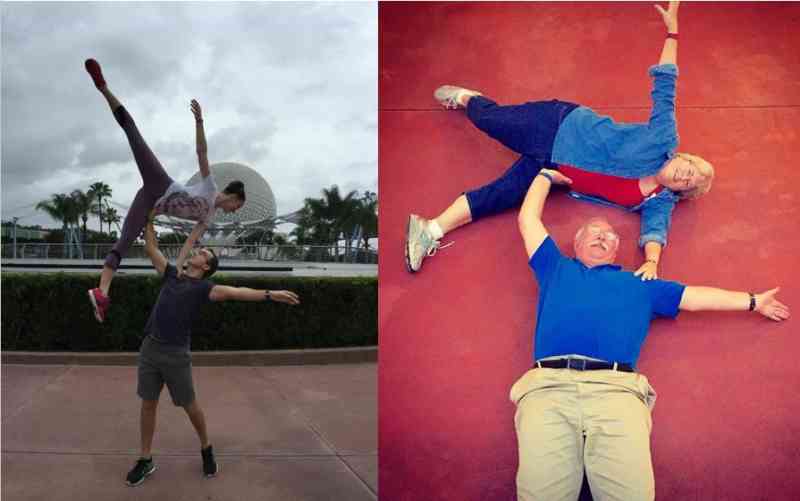 5. Freezer Bags: When this husband opened up his fridge he noticed his wife put the freezer bags in there. His wife is way too pure for this world if she thinks that these bags actually need to be placed in the freezer. This is so adorable and funny, we can’t get over it. 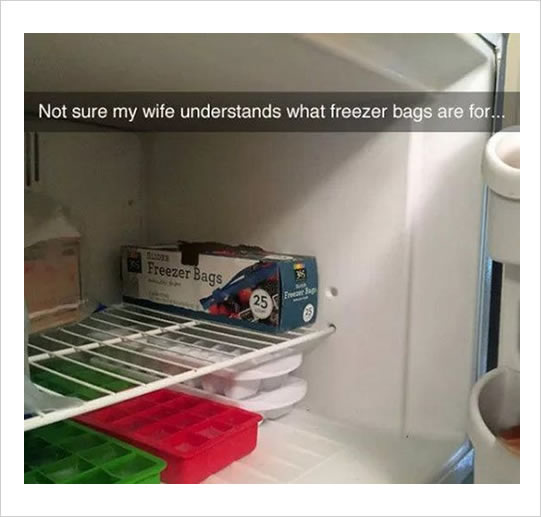 6. Student Grandma: This grandson caught his grandmother working on her master’s thesis. This grandma is so cute working on her thesis on the computer. We would not want to interrupt her while she was intensely in the zone like she is here. We love that she has the determination to get her master’s degree no matter her age. You go, grandma. 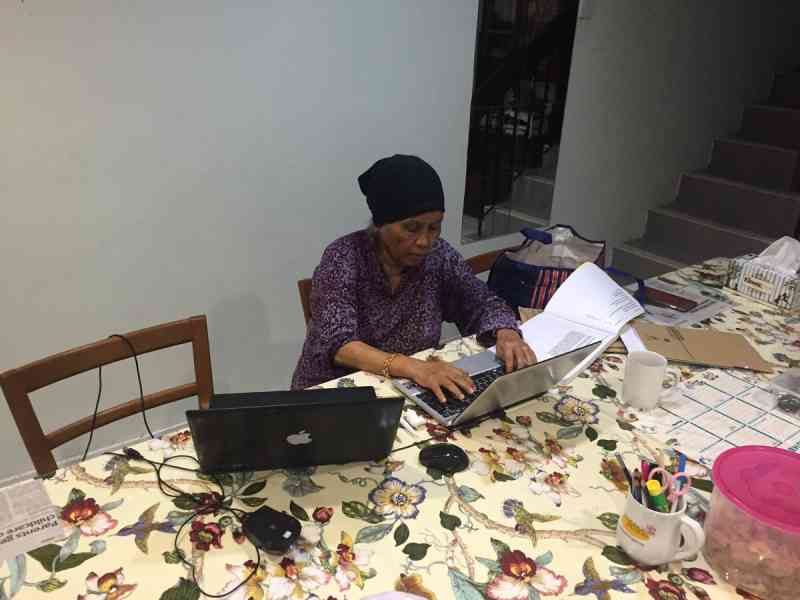 7. Feeding Chickens: This girl is so pure she can’t possibly be living in this world. She made a bunch of tiny pancakes, which we all know take forever to make, all to feed to her chickens. It’s really rare that we want to make pancakes for ourselves or our loved one. But this girl when through all that cooking for her beloved chickens. 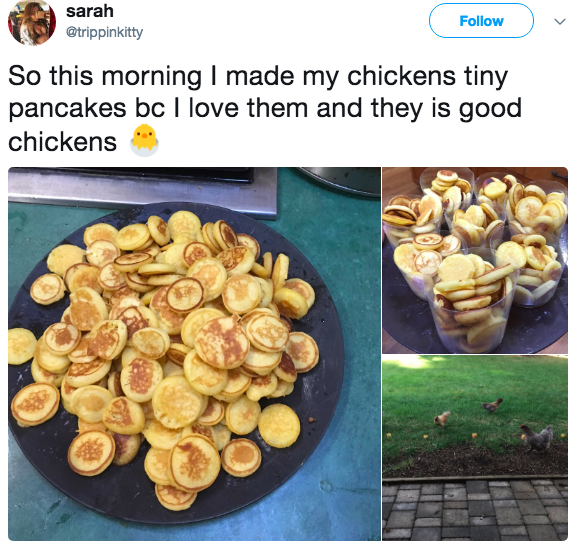 8. Painting Party: A lot of us think of a party of having alcohol and loud music. Well, not this guy. For his birthday he wanted to have a painting party. How pure is that? His friend and him look like they had a really good time at this party. Maybe all of us should try this out sometime. 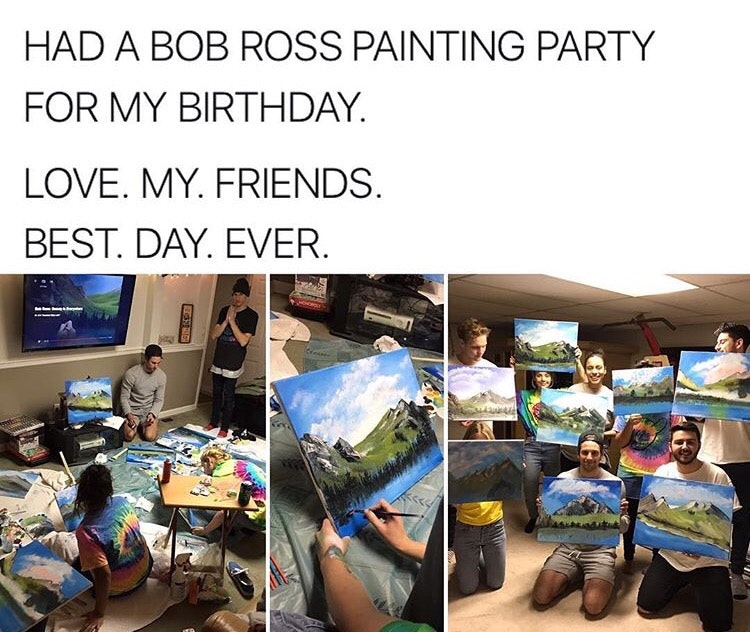 9. Dog Training: This boy wanted to train his dog and his father told him that there are videos on YouTube to help. What the dad actually meant was that the son could look at them to learn how to train the dog. But the boy is way too pure for this world and thought the dad meant show the dog videos on YouTube. It seems the dog and the boy are loving the videos though. 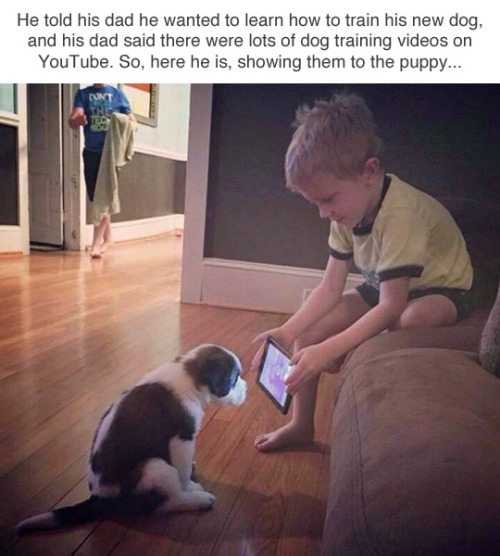 10. Overhear Conversation: Remember when you were in grade school and everything was simple. We were all so pure back then, just like these two boys. This girl overheard two school boys talking about falling in love. And just like a pure young person would do they replied that they would fall in love with someone that likes pancakes like them. How innocent.

11. Duck Family: This guy dressed up as a duck, for what reason we have no clue. But what makes this so pure is that he decided to go hang out with some real ducks. This is so cute, random and funny that we can’t stop laughing at it. We wonder what people thought when they saw this happening. 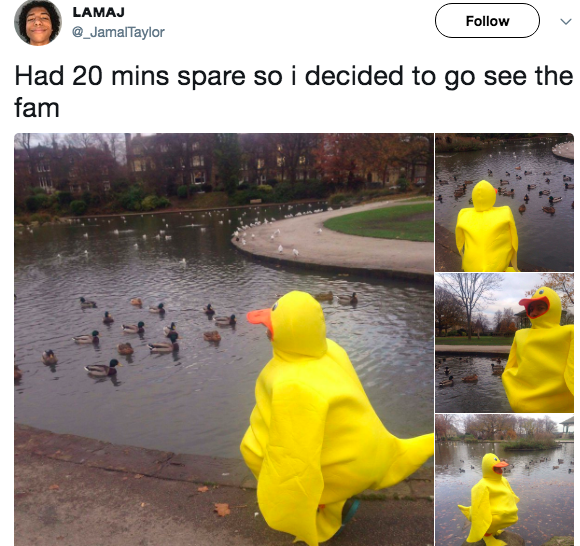 12. Collections: People have collections of all sorts of things, but we have never heard of a paperclip collection. Turns out that there is such a thing and Bert is so pure that he thought this was one heck of a day. If only all of us could enjoy the simpler things in life. 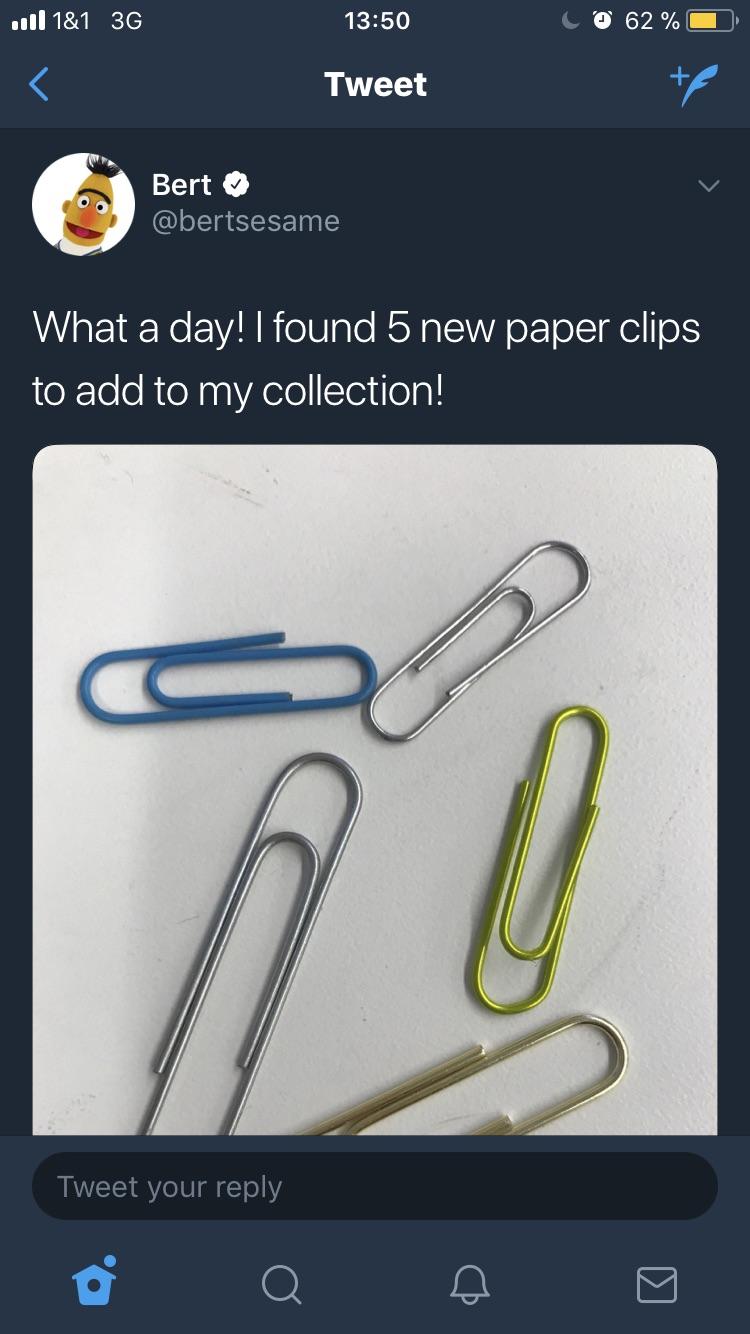 13. Pokemon Grandma: This grandmother downloaded Pokemon Go on her phone. She wanted to know what all the hype was about and got really into the game. The way Cathy describes playing the game is so pure that it’s way too pure for this world. And we are loving it.

14. Sushi Man: This guy’s uncle went to Japan and was really loved. There is only one reason why someone would go through all the effort to make sushi that resembled a human. And that reason is that they thought that you were way too pure for this world and deserved more. This is cute amazing to look at and we wonder if we will ever get this done for us.

15. Game Day: When we attend a sports game we all have a thought in our heads of what team we are on, and who we want to win. This guy is way too pure for this world and decided that he was rooting for both teams. You never get to see anything like this but thanks to this guy we now do. 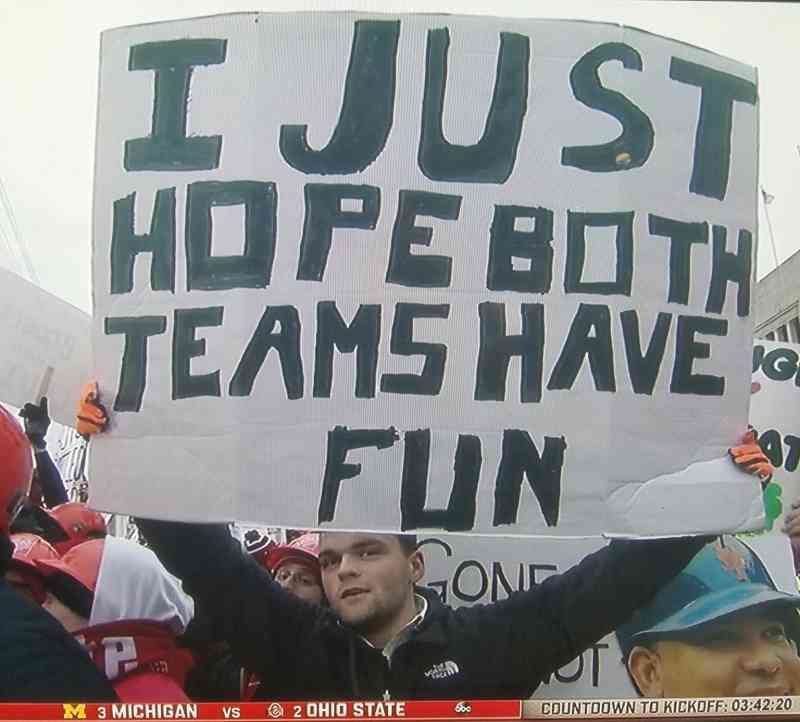 16. Lesson Taught: If anyone got bit by an animal and they stuck around afterward you would probably run away. But this tough grandma stuck around after they got bit by a pelican. This pure grandmother decided to teach this pelican a lesson and told them that it’s not nice to bite. How cute. 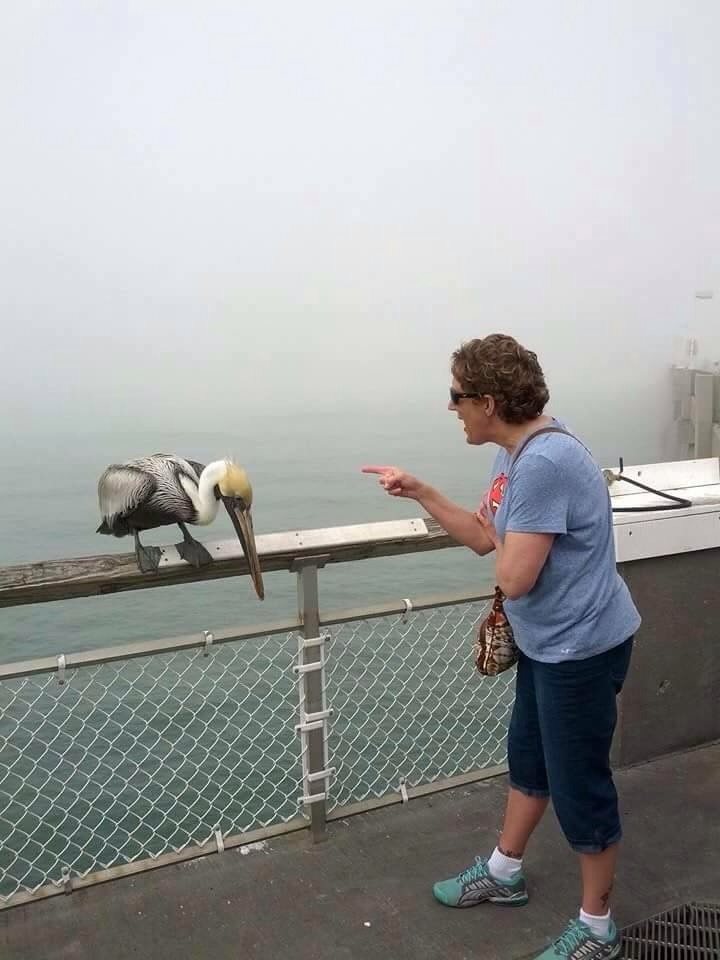 17. First Impressions Matter: When this guy found out he was shortly going to become an uncle he headed to the delivery waiting area in a suit. When asked why, he told everyone that first impressions matter. This might be one of the purest things on this list and we love that this guy thought so much of his niece or nephew to do this. 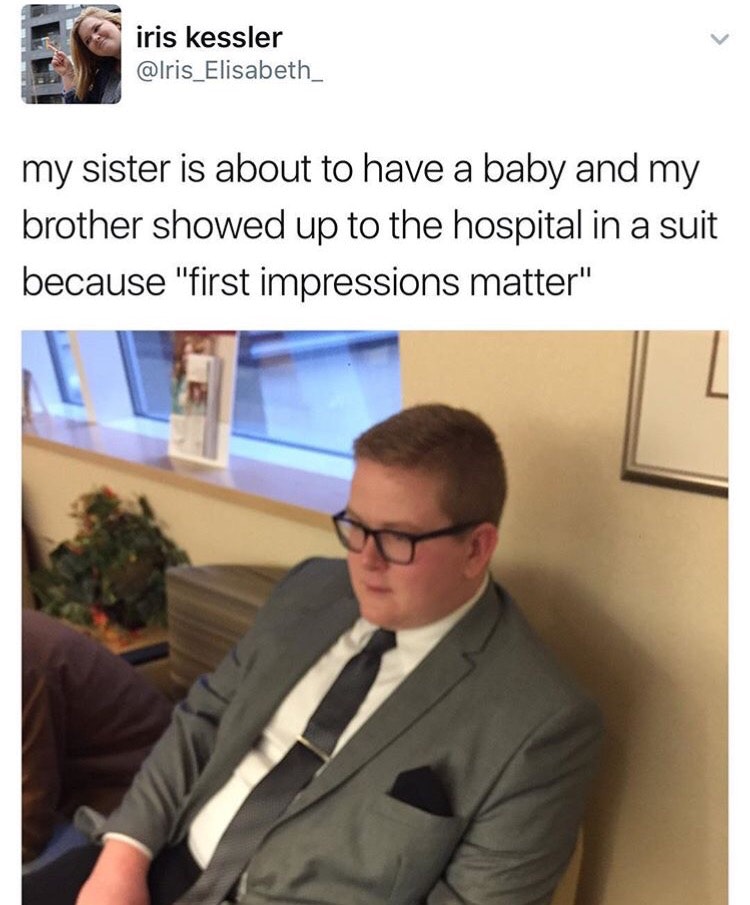 18. Trip To Florida: This guy decided to book a trip to Florida to pet a dog that he saw in a photo on the internet. We have never heard of this happening before and we love the fact that this man got super excited to pet this animal they haven’t actually met before. This guy is way too pure for the world to handle.

19. Cat Fight: When these two parents heard their cats fighting they took them apart. After a while these two made the cats sit down together and have a reconciliation. This is something only people who are way too pure for this world would do. We are really curious as to if this technique actually works on cats.

20. Those Are Some Nice Jeans: These two boys might be the purest ones in their school. When their principal told them that he liked their jeans they went out and bought the principal a pair. The best part about this is that the principal actually wore them around the school for a day. We wish our principals were this cool. 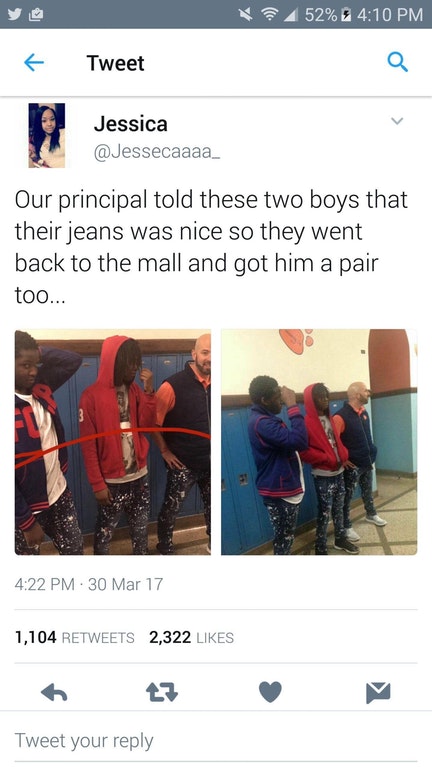 21. Hero In Booty Shorts: This guy is definitely one of the purest people in the world today and we wish we had a friend like him. When his friend needed a pair of pants to wear into their exam he decided to switch out his sweatpants for booty shorts. This is one of the purest things to happen in school. 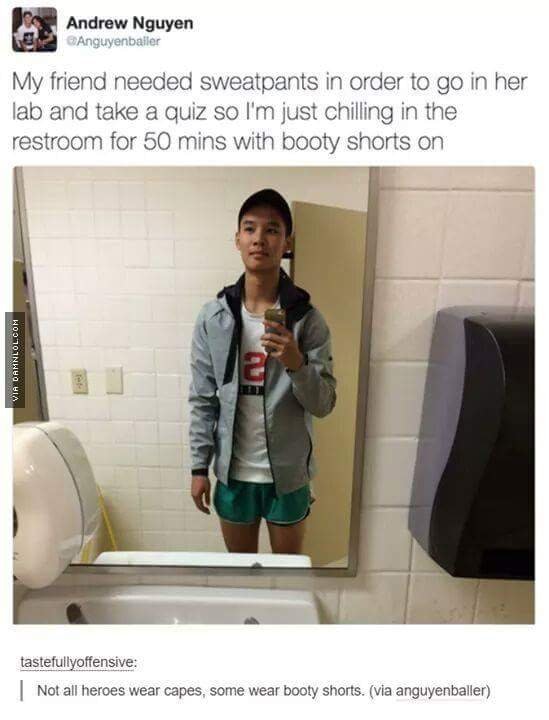 22. Caring Baby: This girl was having a really bad day and then met this baby. If there is one thing that is pure in this world it is a baby. They don’t know anything else really except innocence. When the baby say that this girl was having a bad day it reached out and offered her a hand. This is so adorable. 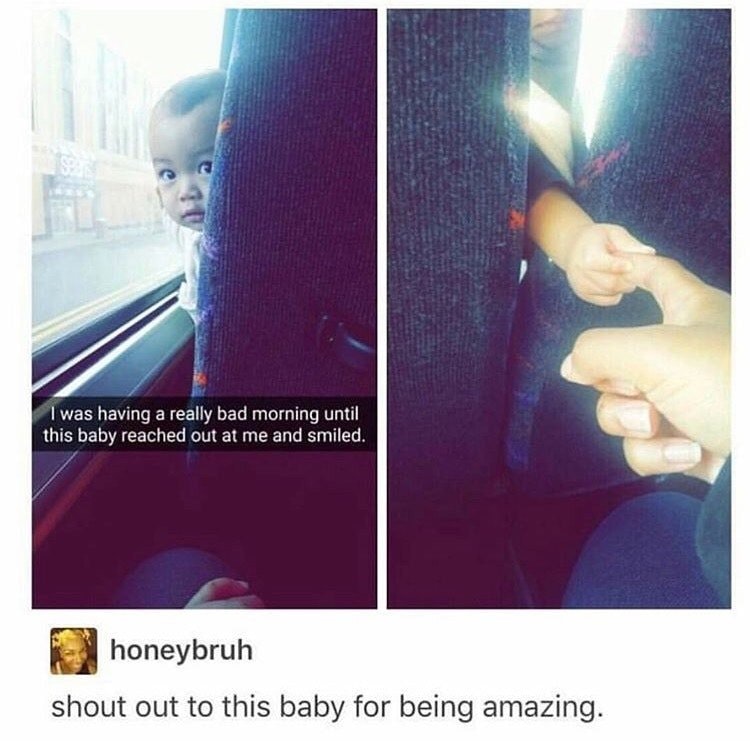 23. Cool Dad: This dad has to be cool and pure because he has a whole folder of photos of himself on his laptop. When you search through someone’s laptop you expect to find something bad, but there is nothing at all bad about finding a cool dad folder on your father’s laptop. Way to keep it pure.

24. There’s Ben: The guy holding the Ben sign is Ben’s best friend. He goes to every single one of the this guy’s games. This man is now calling Ben his best friend because he sees him everywhere he goes. This might be the purest form of friendship and the world can’t handle it. 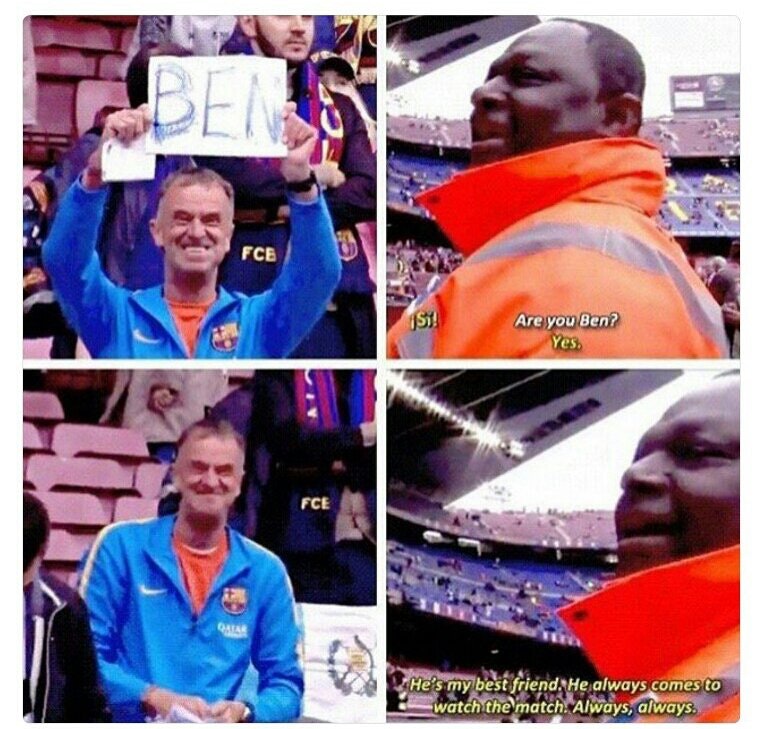 25. Alpaca Love: This kid’s dad went to Peru and met an alpaca in real life. Judging by the messages he is sending his kid we are guessing he never knew these animals existed before. He looks like he is having a blast and anyone who can have this much fun rubbing an alpaca has got to be pure. 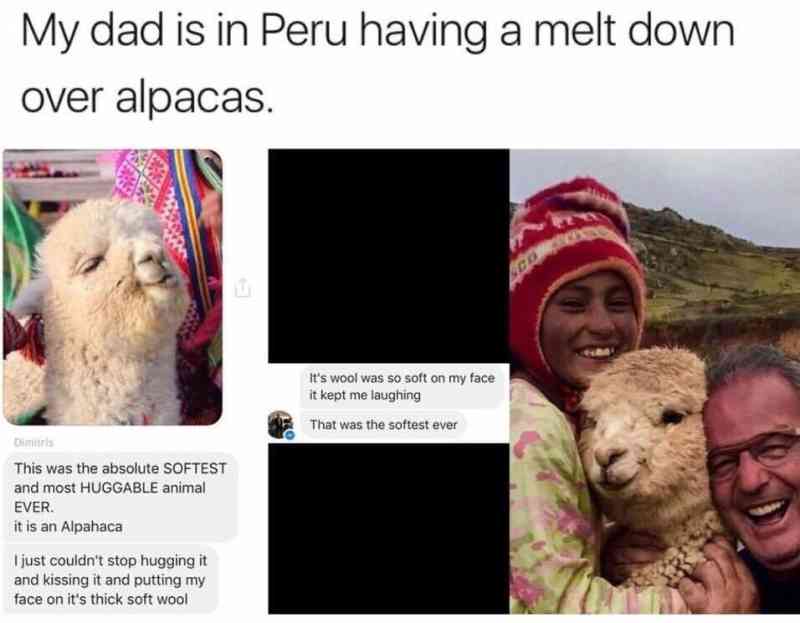 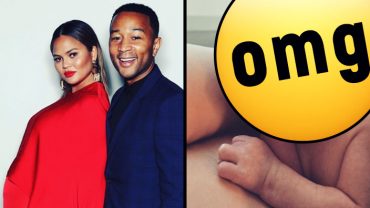 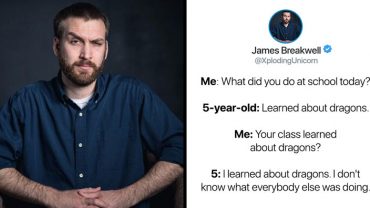 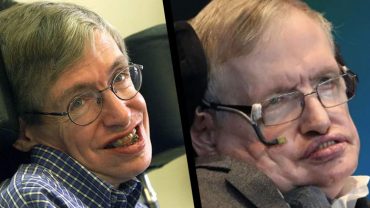 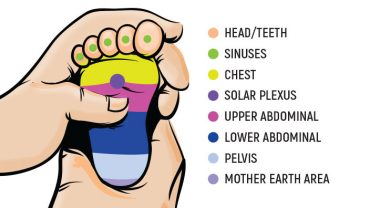